The Cockchafer, the May bug, Billy Witch, or Doodlebug

The cockchafer, also known as the May bug, Billy Witch, or Doodlebug is a big, noisy, flying beetle.

The Life Cycle of the Cockchafer

After emerging in late April or early May, the adults live for around five to seven weeks.

Females begin to lay around 60 to 80 eggs in the ground after about two weeks. The location of egg laying depends on the species; the common cockchafer lays eggs in fields, whereas its northern counterpart favours areas populated with trees, hence its colloquial name of “Forest Cockchafer”. Oak leaves are the preferred food source for adults. Larvae hatch after four to six weeks, and feed on plant roots.

Their development in the earth can take up to five years in colder climates.  Once they have grown to 4-5cm they pupate and develop into adults. Due to the long development period of the cockchafer, they tend to appear in cycles of every three or four years, which varies depending on region.

This beetle was given its colloquial name of “May bug” as the adults begin to appear in late springtime, around May, so you may see a cockchafer at this time of year.

Whilst both species are brown in colour, they do have distinguishing features.

These two species can also be differentiated by their differently shaped tail ends; the common cockchafer has a slender, longer tail end, whereas the northern variety’s tail end is shorter and knob-shaped.

Before considering how to deal with beetles, it is advisable to know exactly what kind of insect you are dealing with!

At Avon Pest Control, we receive calls from confused homeowners who think they have sighted a cockroach in their homes, when in fact they have seen a slightly lost cockchafer.

The best way to tell the difference between these two is to pay close attention to the antennae. 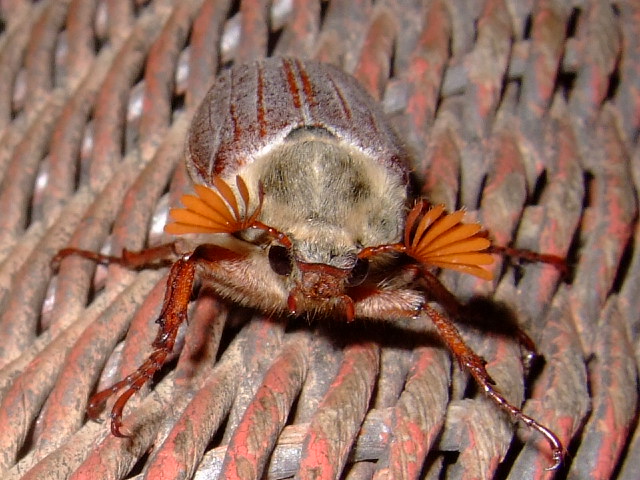 Cockroaches have long, swept back antennae in contrast to the cockchafer whose antennae is short, fanned, and forward facing.  The male cockchafer has seven “leaves” on each antenna, and the female has six.

Cockroaches move from sewers, to drains, and into spaces populated by humans, contaminating any surfaces they encounter. They carry bacteria such as salmonella, staphylococcus, and streptococcus and cause food poisoning, making them dangerous to humans.

The cockchafer, on the other hand, is harmless. The sharp point found at the tip of a cockchafer’s abdomen is not a sting, but a harmless pygidium used by females to push the eggs into soil. The larvae is considered an agricultural pest, which in large numbers can damage crops, but they pose no direct threat to human health.

If you need help identifying a Cockroach from a harmless Cockchafer, look no further! Call Avon Pest Control today 01926 632 929 or 01789 293 463 or click here to visit or website for more information on our services.

COVID-19: We are currently operating with Strict PPE Controls on Essential Work for Your Safety.

More from my site

Avon Pest Control
4.9
Based on 11 reviews

John Riley
10:09 08 Oct 19
Called Avon Pest Control yesterday morning as we had a wasps nest on the 2nd floor of our house. They attended before 3pm, and a very knowledgeable gentleman knew exactly what to do. Filled and taped up the points of ingress, was able to apply the treatment to the external access despite the height, all done in 30 minutes. He told me there would be a lot of activity at first, then it would subside, which it has. A prompt and efficient service from a local company (less than a mile from my home).

Bob Grace
15:01 17 Sep 19
Called Ian at Avon Pest control to help with a swarm of bees. Fast response only to find that they are harmless Mining Bees!! Ian's advice, leave them alone as they are harmless and no charge for the visit. Great service Ian and thanks.

Maeliosa mc carthy
16:37 04 Sep 19
Superb service from Ian. I have a property with rodents and very worried tenants. Ian came round within 2 hours reassured the tenants of how to deal with the issue. Very professional. Cant fault this service.

Erin Sullivan
11:24 08 Aug 19
Extremely prompt, professional, and helpful service. Came to our house very quickly after calling, assessed the situation, and recommended waiting rather than treatment. Did all of this for free and wouldn't accept a call out fee. Will definitely use them again if any other issues come up.

Catrin Astor
12:31 15 May 19
So impressed by this company. Trustworthy, friendly and reliable.

Bill w
17:36 02 Sep 18
Fab service, delivered for a fraction of the quote from the market leading provider. First time success removing a hornets nest from a very inaccessible and high position. 100% recommended.

Stephen Kaye
15:32 16 Aug 18
First class Called at 2pm they came spot on 3.30 found my wasp nest and exterminated within the hour Cean tidy reliable Second time I have used them

Wayne Gibson
08:51 24 Jul 18
Contacted Avon pest control for some help and advice on identification of a pest and cannot express enough how brilliant they were. Email response was very quick, well within the 2 hour time frame outlined for a response on their website , and Ian was very helpful and professional. Thankfully I didn't need any further or more advanced expertise but if I had of needed further help I would have had no hesitation about the level of quality and professionalism this company would provide. Thankyou for all your help!

Chris Rann
14:00 22 Nov 17
Avon pest control came out to investigate how birds were getting into out loft. He got his ladder out and went to the roof to investigate, as soon as he was up there it became obvious to him that two tiles were out of place. Within seconds he had re secured the tiles, had a good look at the rest of the roof, both front and rear to see if there were anymore possible entry points, which there were not. On completion I asked how much the bill was to which he replied there was no charge as he was only here a few minutes. He could have quite simply told me that further work was required which I would have excepted, but no, it was a two minute job that he wouldn't charge for. Really nice knowledgeable chap who has restored my faith in human nature, I would have no problem recommending Avon Pest Control safe in the mind you will get a fair and honest job.
See All Reviews